skip to main | skip to sidebar

Today we received the following message from the La Rue Village Office, regarding this year's Christmas in the Village celebration:

** Important Message **
Christmas in the Village has been canceled due to predicted low temperatures.

Santa, hot dogs, cookies, and hot chocolate will be available at the bank from 3-6pm.

Although most of us hate change, this seems to be the best decision. Temperatures for Thursday are predicted for a high of 7 degrees, and a low of -1, with winds of 15-20 mph.


The weather outside might be cooling off, but we have been busy inside.

If you’ve been following our schedule you already know our meeting on December 7th was busy.  Starting with a pizza dinner, 19 members enjoyed an active meeting of fellowship, degree work, and a celebration of Masonic service.
Assisted by RWB Willard Fissell and Brothers from the 10th Masonic District, our most recent Master Mason had an excellent experience.  It was a double blessing for us, as it also served as preparation for our MM Inspection February 11th (see calendar below). 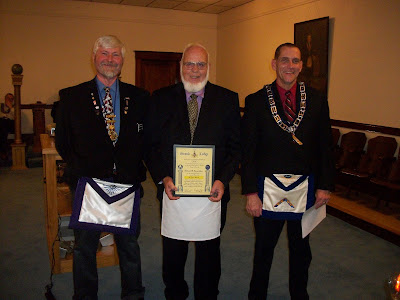 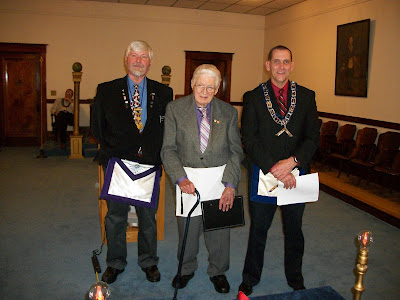 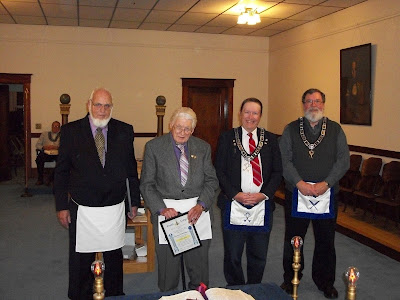 WB McMahan merits special mention, and not just for his 65 years of membership.  Utilizing skills learned as a former restaurant owner, WB McMahan has been responsible for more Masonic Dinners than anyone can remember.  He has also served as Junior Warden for more years than anyone remember, with best estimates exceeding 30 years.  This November, at the age of 93, WB McMahan decided to step down as Junior Warden to be able to spend more time with his wife, who is experiencing medical issues.  Any Lodge would feel fortunate to have members such as this.  We know we do.

Below is our adjusted calendar of events.  One significant adjustment is for our next meeting, December 21st.  That evening will start with dinner at 6:30pm, consisting of chili and cornbread.  Bro. Mike Wells will be preparing the meal, and frequent attendees will know to come early.

We’d like to remind you of a special local event.  La Rue’s Christmas in the Village celebration will be on Thursday, December 15th.  The family-friendly celebration has a number of attractions.  Keeping with tradition, the parade starts things off at 5pm.  The event continues with performances by the Elgin band and show choir, local church choirs, the Marionaires, carriage rides, train rides, live reindeer, food, and visits with the Big Guy – Santa!  And did we mention this was all free?  This is truly an event that only a small community could do right.

With that in mind, below is our anticipated schedule for the balance of 2016, and what is known for 2017.  Adjustments will be made as necessary, so check back often.

That’s what we know for now.  See you at Lodge!

Meetings are the first and third Wednesdays each month, September through June, at 7:30pm, in LaRue, Ohio.